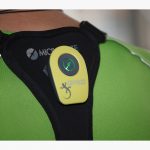 Gyko is a new device, developed by Microgate, for obtaining information about the kinematics
of any body segment as it performs a certain physical movement.

Gyko contains the latest generation components that are used for carrying out accurate and
repeatable measurements of acceleration, angular velocity and magnetic field in three dimensions.
• ۳D accelerometer, to measure the linear accelerations to which the device is subjected.
• ۳D gyroscope, to measure the angular velocities of the device.
• ۳D magnetometer, to measure the magnetic field to which the device is subjected.
Gyko is capable of providing data measurements up to 1000 times per second (1 kHz), thus
guaranteeing extremely high temporal resolution of the data. The system is started via a software
interface (Optogait, Optojump Next or RePower) and the collected data are transferred to a
PC in real time via a Bluetooth 4.0 connection. At the same time, the data are also saved to the
MicroSD card on the Gyko device itself.
Gyko is supplied with a range of supports (vest, belts of various sizes and a magnetic support)
for optimum positioning and securing of the device.
On the basis of the measured data, Gyko uses specific software algorithms to describe the
kinematics of the analysed body segment and provide the user with simple, immediate information
about the execution and quality of the physical movement.
Gyko can be used in conjunction with the OptoJump Next and OptoGait systems, or independently
using RePower software.
The name Gyko is an acronym based on four fundamental concepts associated with the analysis
of movement, namely Gravity, Gyroscope, Kinematics and Control.